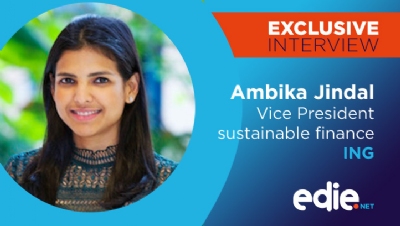 Commercial banks are struggling to overcome a communications barrier with businesses to gain insight into portfolio risks specifically associated with water, according to Dutch bank ING's vice president for sustainable finance Ambika Jindal.

Jindal claimed that the banking community is working hard to create a “pipeline of bankable projects”, but that communication barriers remained .

Investors are getting closer to businesses. The recommendations of the Task Force on Climate-related Financial Disclosures (TCFD) have added a layer of scrutiny on a company’s climate performance to future-proof their portfolios.

So far, much of the investor interest is focused on carbon intensity and while water security is vital part of both the TCFD’s scenario analysis and the Sustainable Development Goals (SDGs), water remains an “invisible” aspect of the climate conversation.

That is the view of ING’s vice president for sustainable finance Ambika Jindal, who told edie that the Dutch bank is in the early stages of creating engaging platforms for businesses to communicate key concerns and opportunities relating to financial assistance into water projects.

“Commercial banks so far have not tapped into water data, and we’re trying to talk to companies about their water footprints,” Jindal said. “It should really be the other way around too. They should come to us with their measurements and understandings then talk to a bank about finance solutions. It’s a conversation that needs to happen right now, but it's not.

“No matter what sector you’re in, you have to think about water, but the recognition is completely invisible. Banks and companies face a lot of pressure on the topic of carbon, but less so on water. The impacts of water stress haven’t been fully captured by some commercial banks and corporates. It remains quite invisible in the process.”

In a recent blog post, Jindal explained that many companies have improved water efficiency in their operations, but that most of the water footprint is located in the supply chain, where access to finance is limited.

ING has had a supply chain initiative in place since 2010. The bank told the Guardian that it enables companies to reward suppliers that place an emphasis on environmental, social and governance (ESG) issues, by reducing invoice costs on supply chain finance schemes.

In theory, the initiative would increase access to finance amongst smallholder farmers, but ING is finding that the conversations between the bank and companies aren’t uncovering the crux of water-related issues.

Jindal claimed that the banking community is working hard to create a “pipeline of bankable projects”, but that a lot of companies or governments were asking for finance towards the end of the project’s timeframe, when it is too late to reduce any potential risks. This, Jindal explains, is limiting the number of projects that ING can successfully back.

“It’s better to know what is needed before they start scaling [the project],” Jindal said. “It builds a pipeline of bankable projects, but they usually approach us at the end, when it’s too late to change anything.

“Corporate finance is a missing part. If we could talk to corporates that are very present in these water-stressed regions, we can see how we can further solutions there.”

ING has put mechanisms in place to back projects. In the Sottish Highlands, the bank is financing a portfolio of 10 run-of-river hydro projects, which will generate renewable energy equivalent to the power consumed by 20,000 households.

Elsewhere, ING acted as the joint mandated lead arranger in a £250m “blue bond” for Anglian Water. The funds will finance projects that combat droughts and promote resilience, energy efficiency and water recycling.

With 63% of cities predicting future risks relating to water supply, many of which will be exacerbated by climate change, Jindal believes that businesses and banks need to view water as an economic opportunity by analysing new business models and systems.

For example, ING estimates that circular economy methods in water-stressed regions could save 412 billion cubic metres of water each year, the equivalent to 11% of annual global water demand.

Currently, just 7% of disclosing businesses have placed an internal price on water. If businesses and banks can adopt new mindsets when examining water footprints, the economic case for backing projects becomes stronger. Jindal created the ING Water Community, a Linkedin group to discuss these new ways of thinking, but argues that discussions need to branch out from the sustainability department into other areas of the business.

“I feel that sustainability professionals are talking about water, but CFOs aren’t,” Jindal adds. “It impacts your business, which means it’s a financial indicator, and we want to play the role of making it visible as part of our financing. It would make more CFOs take notice, which is what we need.”