The Green Building Blocks of Cities 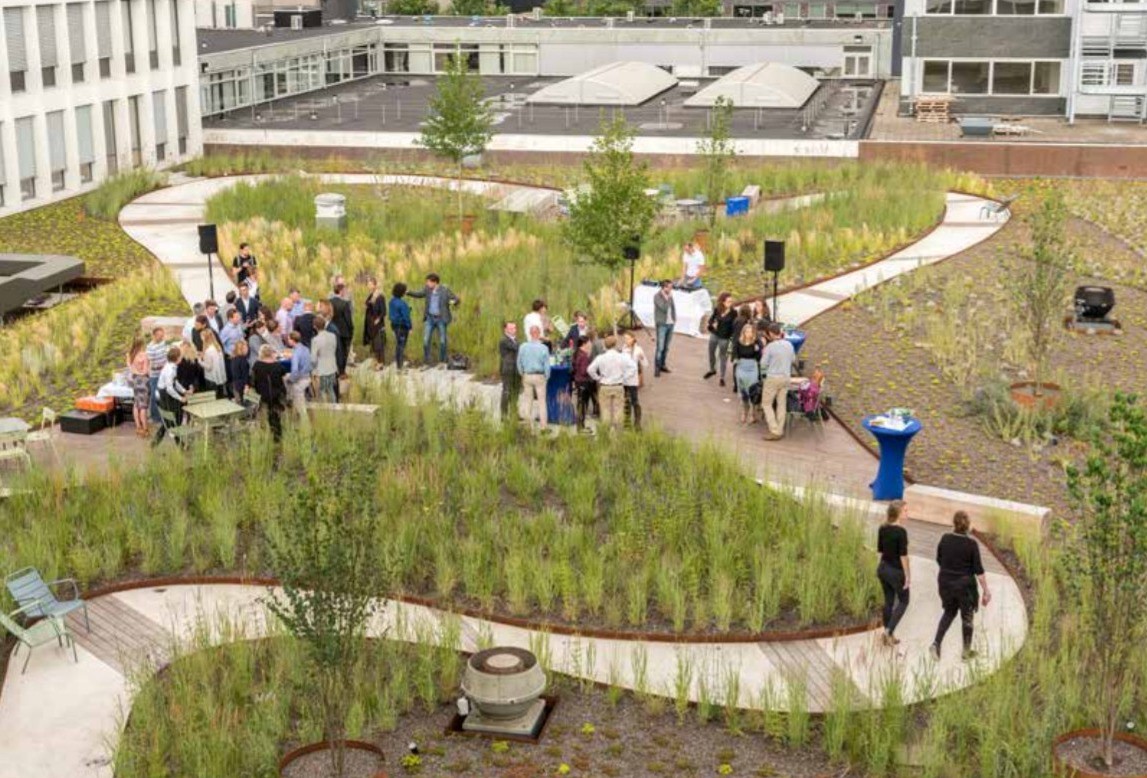 Many cities around the world are turning to Nature-Based Solutions (NBS) to enhance their resilience to climate change while creating livable spaces for their residents.

NBS are strategically planned and managed networks of green spaces and other environmental features and technologies that manage water, as well as temperature and air quality in order to create resilient, healthier, and more beautiful environments for residents.

At the city-level, NBS are a patchwork of natural areas interlinked to provide clean water, flood protection, food, and recreational opportunities. At the local-level, NBS includes stormwater and drainage systems that mimic nature by soaking up and storing water and improving its quality.

One city leading the way in implementing NBS is Amsterdam, which, faced with rapid population growth and climate change threats, is developing various types of green spaces — or green building blocks — in both existing and new neighborhoods to achieve a variety of benefits including enhanced climate resilience, increased biodiversity, and improved human health.

· Increases the retention and reticulation of rainwater, all the while having a cooling effect on surface temperatures

· Provides opportunities for recreation and relaxation

A variety of NBS are being implemented across Amsterdam, all with different spatial scales, including:

Green pocket parks and neighborhood parks : These are small parks designed to invite activity, with the parks themselves (co-)managed by local residents with support from Park om de Hoek, an initiative of the De Gezonde foundation which aims to empower inhabitants to (re)create their neighborhood based on their own needs, ideas, and wishes.

Green play streets : Over the past decade, a number of streets within the A10 Ring Road area have been closed to traffic and turned into green spaces for people to meet and play in. These ‘livable’ streets have also been created in Zuidas and the Laan van Spartaan.

Sidewalk gardens : As many residents, particularly those within the A10 Ring Road area, have no balcony or garden they are encouraged to create beds of plants and/or flowers on the pavements, green the facades of their houses, or fill up gaps in bare soil around street trees.

NBS can be implemented at various scales so cities can simultaneously adapt to climate change, enhance the natural environment, and improve human health.

*Robert C. Brears is the author of  Urban Water Security  (Wiley),  The Green Economy and the Water-Energy-Food Nexus  (Palgrave Macmillan), and of the forthcoming titles   Natural Resource Management and the Circular Economy (Palgrave Macmillan)   and   Blue and Green Cities   (Palgrave Macmillan). He is Founder of Mitidaption, which consults on climate change risks to business, governance, and society.