Pumped hydro could store 1,000 times more renewable energy than Australia will ever need 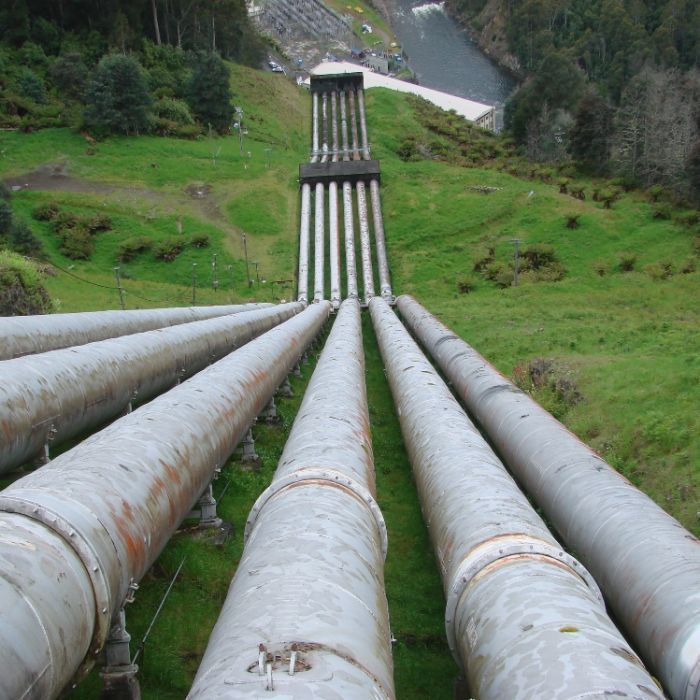 Australia has the capacity to store up to 1,000 times more renewable energy than it could ever conceivably need, according to an analysis by researchers at the Australian National University (ANU).

By Stephen Smiley and Caroline Winter

ANU engineering professor Andrew Blakers has conducted a study looking into pumped hydro sites and has concluded that there are at least 22,000 suitable locations nationwide.

Professor Blakers said if storage was built at just a tiny fraction of those places, Australia could transition to 100 per cent renewable power within two decades.

"No matter where you are in Australia, you will find a good pumped hydro site not very far away from where you, or your wind or your solar farm is located," he said.

"We only need to build about one or two dozen to support a 100 per cent-renewable electricity grid."

Pumped hydro works by pumping water uphill between two connected reservoirs when power is plentiful, and dispatching power to the grid when demand is high or when wind and solar do not work.

The power could be quickly dispatched to the grid, when needed.

"It can go from zero to full power in about one minute," Dr Stocks said.

The technology behind pumped hydro is not new — a facility was opened in the 1970s at the Tumut 3 Power Station at Talbingo in New South Wales.

Pumped hydro is also widespread in Europe, especially in the alpine parts of Italy, Germany and France, and in Scandinavian countries like Norway. It is also widely used in Japan and the United States.

Professor Blakers said as investment in renewable sources of energy like wind and solar increases in Australia, the need for pumped hydro storage would grow.

"We have so little solar and wind in the system at the moment that we don't need the storage," he said.

"Maybe now South Australia, at 50 per cent wind and solar PV, is just getting to the stage where it does need either strong interconnection or a pumped hydro or both.

"But the other states will catch up and will be at the 50 per cent level by the early 2020s I think, so they also need to start planning with pumped hydro now."

'Australia could be fully electrified within two decades'

For the report, Professor Blakers, Dr Stocks and their colleagues looked closely at tens of thousands of sites Australia-wide.

They found the greatest density of pumped hydro storage sites was in New South Wales, where they estimated there was potential to build 29,000 gigawatt hours' worth of storage capacity across 8,600 sites.

"All the way from North Queensland down to near Melbourne has thousands and thousands of sites."

Professor Blakers said if pumped hydro storage facilities were built at just a handful of sites spread out nationwide, Australia could run on renewables alone.

"Pumped hydro, high-voltage DC interconnectors between the states, solar photovoltaics, wind, batteries and demand management can do the whole job," he said.

The ANU researchers' work was funded by a $500,000 grant made by the Federal Government's Australian Renewable Energy Agency (ARENA).

Pumped hydro and its potential role in SA

The PM wants to further investigate pumped hydro as a way of boosting energy stability in Australia. But what is it and could it help South Australia in particular?

ARENA is itself already funding feasibility studies into pumped hydro storage in Tasmania, and in the Upper Spencer Gulf in South Australia and Kidston in north Queensland.

ARENA's CEO Ivor Frischknecht said while additional research was now needed into the 22,000 sites identified by the study, the message was clear — Australia could have 100 per cent renewable power.

"There's no question that wind and solar investment are going to keep going," he said.

"The challenge is to ensure that we end up with a reliable system that is also affordable, and that's where this study comes in.

"This study shows that it would be relatively affordable to run the entire system on wind, solar and pumped hydro."

In a statement to AM, Environment and Energy Minister Josh Frydenberg welcomed the study's findings.

He said the Government was already delivering a "major expansion" of the Snowy Hydro scheme and cited the on-going feasibility studies in Tasmania, South Australia and Queensland.

The Minister also indicated that the Government was working on a "new priority funding round for large scale storage and other flexible capacity projects including pumped hydro".