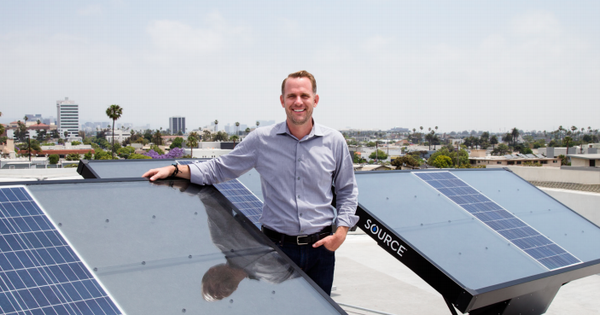 It’s often said you can’t make something out of nothing. Cody Friesen may have come as close to succeeding as anyone.

To show me his technological sleight of hand, Friesen invites me to a hillside house in Berkeley, California on a sunny afternoon. There, in a shaded courtyard, we each sample a cup of water that flows from a drinking fountain. The water is cool and delicious – and it was made out of thin air. Literally.

Nanomaterials – and physics, of course – played a role too. The drinking fountain is fed by a flexible pipe that leads to the house’s roof. There sit two Friesen’s devices, called Source Hydropanels. Each looks like solar panel mounted atop a metal box. The system extracts moisture out of the air at a rate of as much as five liters per day.

Friesen believes installations like this one could soon be providing clean, quality drinking water to homes, schools and businesses across the United States and beyond – and why not, to rural villages, desert towns or urban slums in the developing world.

“Water stress is a human condition,” says Friesen, who is founder and CEO of Zero Mass Water, the Arizona-based startup that makes Source. “We want to guarantee access to safe drinking water for every person in the world, and fundamentally change the human relationship to water.”

Source is just for  drinking  water. The technology doesn't generate enough volume to be viable for general home or industrial use, let alone for irrigation. And Zero Mass Water has a long way to go before it can prove it can turn Friesen's cool tech into a viable business.

But Friesen, a materials scientist and professor of engineering at Arizona State University, has already installed the Source in eight countries, including Ecuador, Jordan, Mexico and the Philippines. In the U.S., his panels are collecting water at a Duke Energy facility in North Carolina, an office building in Santa Monica, Calif., some Bay Area residences, and a handful of homes and schools in Arizona, where despite the low humidity, Source produces roughly the same amount of water as in wetter climates. Zero Mass, which has raised $24 million from investors, begins selling the Source commercially in the United States on Wednesday.

Friesen’s clean water doesn’t come cheap. A typical setup for a home will set you back about $4500 -- $2000 for each of two Sources and an additional $500 for installation. Friesen says for a household that regularly buys bottled water, payback will take about five years. Considering that Americans drank, on average, 40 gallons of bottled water last year, he sees plenty of potential customers. Friesen says that over its lifetime, a two-panel set up may help to remove 70,000 plastic bottles from circulation.

But Friesen has a pitch and a plan to push Source well beyond homes. Consider a school that’s had issues with lead in its water. Installing an array of Source – say a dozen or two of the devices -- could be cheaper than replacing decrepit infrastructure. Contamination doesn’t have to be on the scale of Flint, Michigan for the idea to make sense. Last year, the Los Angeles Unified School District, for example, spent nearly $20 million to retrofit or remove 48,000 contaminated drinking fountains. Zero Mass' backers believe numbers like these point to Source's viability not only for homes but also for institutions and organizations.

“In developed markets, Source can be a choice for consumers, much like renewable energy is,” says Will Sarni, a hydrologist and veteran water industry consultant, who advises Friesen part-time. “It is absolutely a viable substitute that gets us away from capital-intensive, centralized water systems.”

Source works something like this: It draws ambient air through a fan into its devices. There, special nano-materials engineered by Zero Mass absorb the water through a process similar to what makes sugar in an open container clump with humidity. Similar, but highly concentrated, Friesen says. The solar panel then helps separate the water from the material. After it is condensed, it flows into a reservoir below the panel, where it runs through a mineral block that adds magnesium and calcium common in drinking water.

Friesen says a typical solar power installation creates valuable, but somewhat intangible output. “With us, you get to hold the result of that solar energy in a cup,” he says. “It’s an unbelievable experience.”

Friesen, who is 39, grew up in the Sonoran desert in Arizona. He earned an undergraduate degree in materials science at Arizona State University and a Ph.D. in the same field at the Massachusetts Institute of Technology. In 2007, he founded Fluidic Energy, which develops battery technology.

His work on water led him to found Zero Mass in 2014. A year later, he was named to a Henry Crown Fellowship, a 20-year-old program of the Aspen Institute that seeks to “develop the next generation of community-spirited leaders.” Alumni of the program include the likes of Netflix founder and CEO Reed Hastings, LinkedIn founder Reid Hoffman and venture capitalist Ellen Pao.

While in the program, Friesen met Aspen Institute fellow Skip Battle, a former tech exec who sits on the boards of Expedia, LinkedIn, Netflix, Workday and other companies.

Battle became an investor, joining Arnerich Massena’s 3x5 Partners, a growth-oriented fund, Material Impact, a Boston-based firm, and others, who invested over three rounds of financing.

“There is an awful lot of far from pure water being drunk in the United States,” says Battle, whose Berkeley house Freisen took me for the demonstration of Source. “And that’s not just in bad places. It would be so easy to include Source in any new construction."