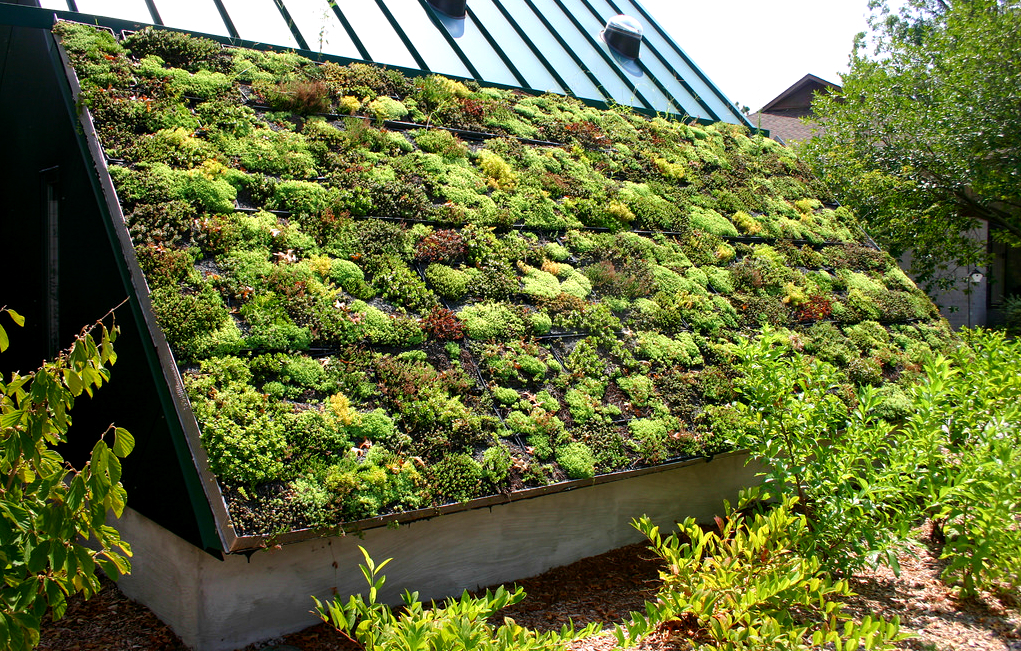 Green roofs are partially or completely covered building roofs with vegetation which replaces the vegetated footprint which was destroyed when the building was created. They provide water harvesting and management, add to building insulation and energy conservation, prolong roof durability and provide aesthetic value.

Green roofs date back thousands of years. Hanging Gardens of Babylon is the first recorded building covered with vegetation.

Green roofs are becoming more popular in a recent couple of decades but there are earlier examples, such as the Rockefeller Center Roof Gardens from 1936.

Purposes of a green roof are different – it may be used for people to gather and their leisure activities, the roof can serve and aesthetic purpose or it is supposed to manage stormwater runoff and reduce the energy consumption.

When building a green roof, desire, purpose and finances need to be taken into account.

Green roofs contribute to biodiversity and provide a peaceful retreat for animals and migratory birds. 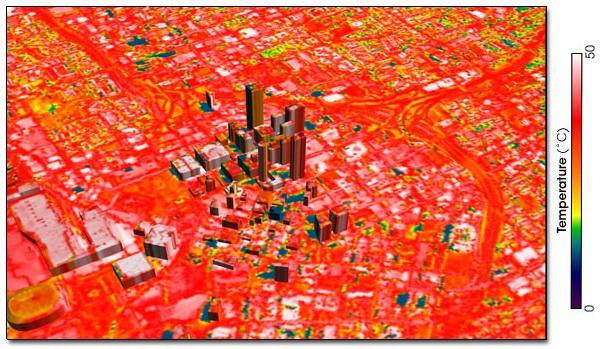 Flat roofs normally reflect only 10-20% of sunlight and the rest of solar radiation is absorbed by heat and, in addition to dark pavements and less vegetation, on a larger scale, the temperature is cities and urban areas is much higher than in rural areas.

Green roofs absorb up to 50% less heat than regular roofs.

As the building roof is heated, a significant amount of energy is consumed by cooling down by e.g. air conditioning.

The growing medium and plants provide an additional insulation layer. The plants absorb the heat and can, therefore, reduce the energy costs for cooling down by more than 75%, according to a study conducted by the National Research Council of Canada. Additionally, by reducing the demand for air conditioning, green roofs indirectly decrease the air pollution and greenhouse emissions.

In winter, the additional layer of insulation retains the heat and reduces the amount of energy needed for heating, lowering the costs.

Roof durability is increased from 50 to 200% by installing a green roof and roof maintenance costs are lowered.

Green roofs also reduce the noise for the residents.

Since rooftops and streets in cities are hard, nonporous surfaces, stormwater volume and velocity increase and threatens to flood. A city block will generate 5 times more runoff than a woodland area.

City blocks make it difficult for stormwater runoff to wash to waterways and if it does wash into waterways at low tides, it also carries pollution into the waterways.

The role of the green rooftop is to absorb the runoff, naturally filter it and slowly release it into the waterways.

Depending on the type of green roof, it will require different levels of maintenance.

Usually, they are planted with low-growing ground cover plants which do not grow high and need minimal maintenance and are specifically chosen to be able to survive heat in the summer and other harsh conditions on the roof.

Built up green roofs are the most common but they cannot be installed on existing roofs as they are installed in layers so installing them would require complete reroofing.

Modular green roofs are self-contained and in small plastic boxes and can be installed on an existing roof, as well as being lighter and cheaper than built up green roofs.

There are two basic types of green roof tops:

Blue-green roof offers a temporary storage for rainwater during heavy precipitation, which can provide an up-and-coming solution for flood prevention.

Runoff water can be stored and used for irrigation or other needs. 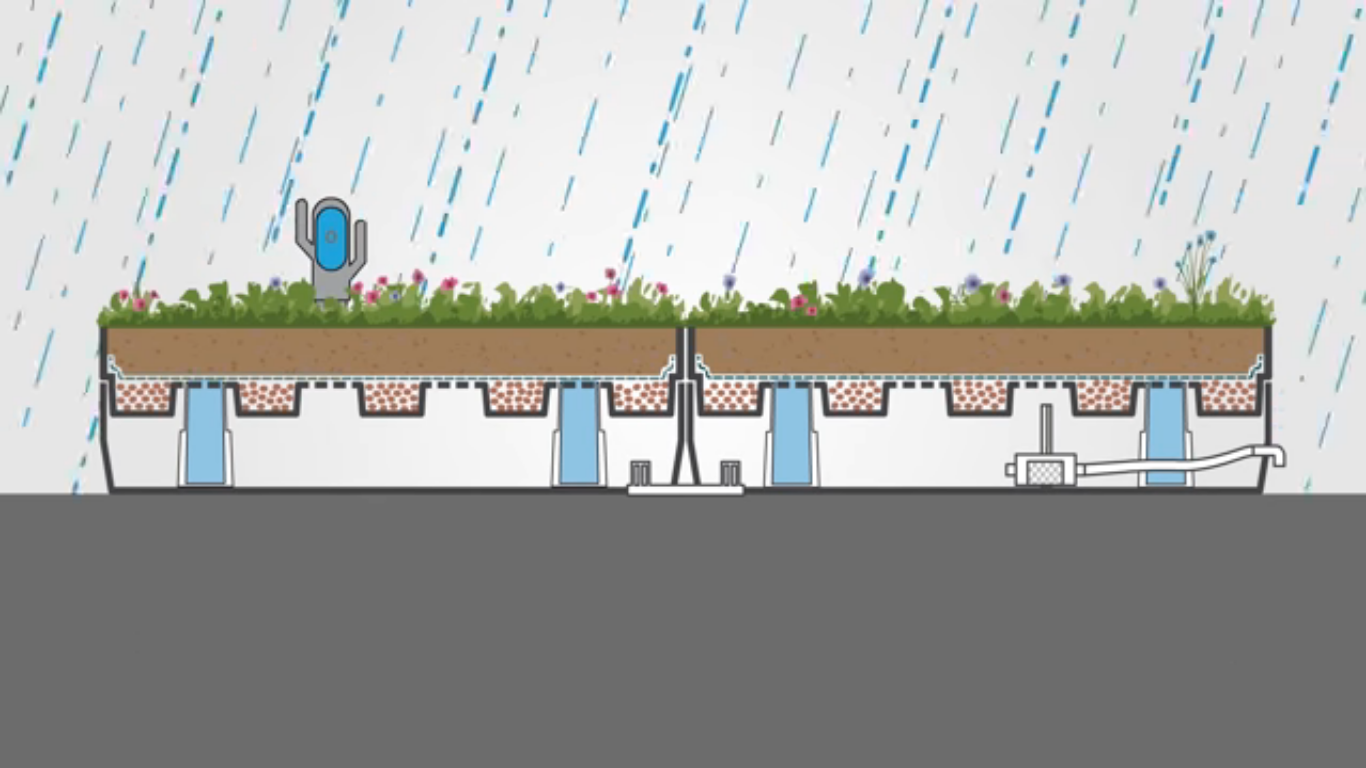 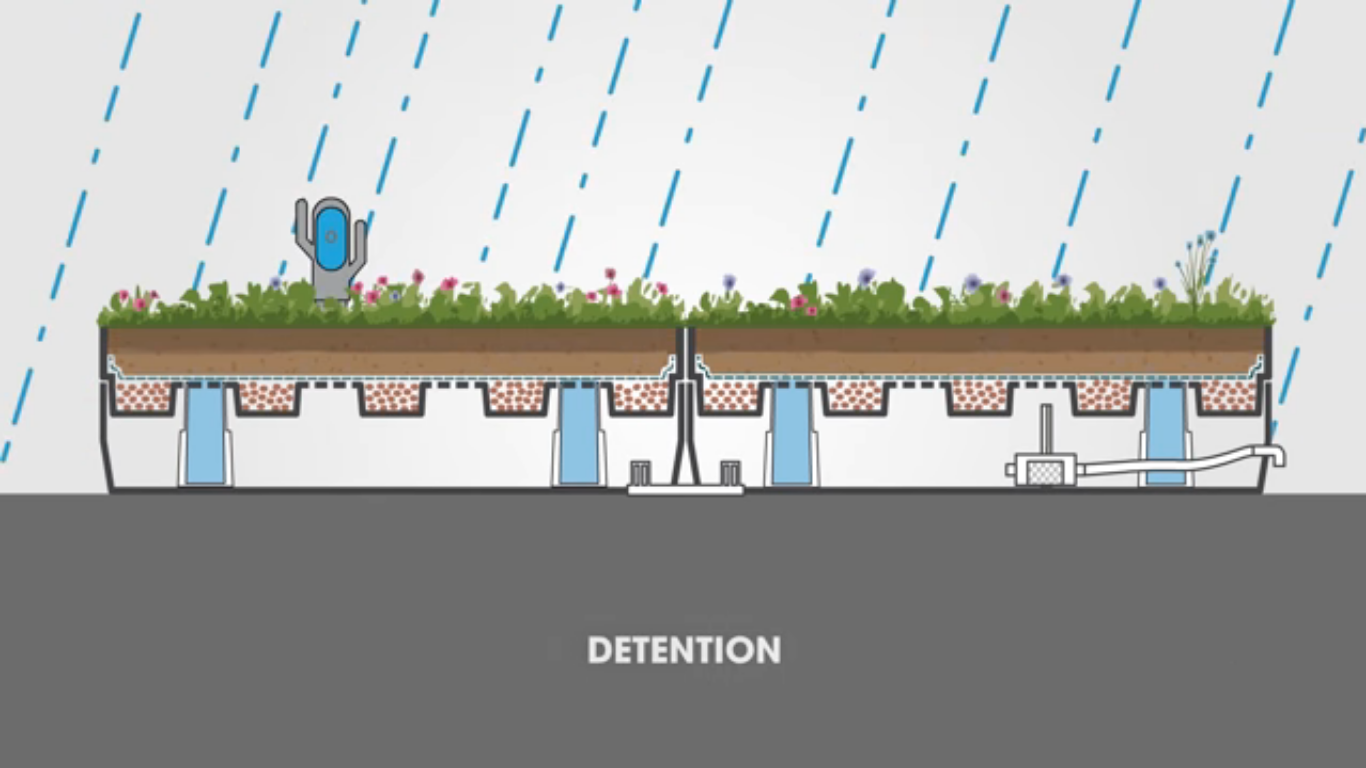 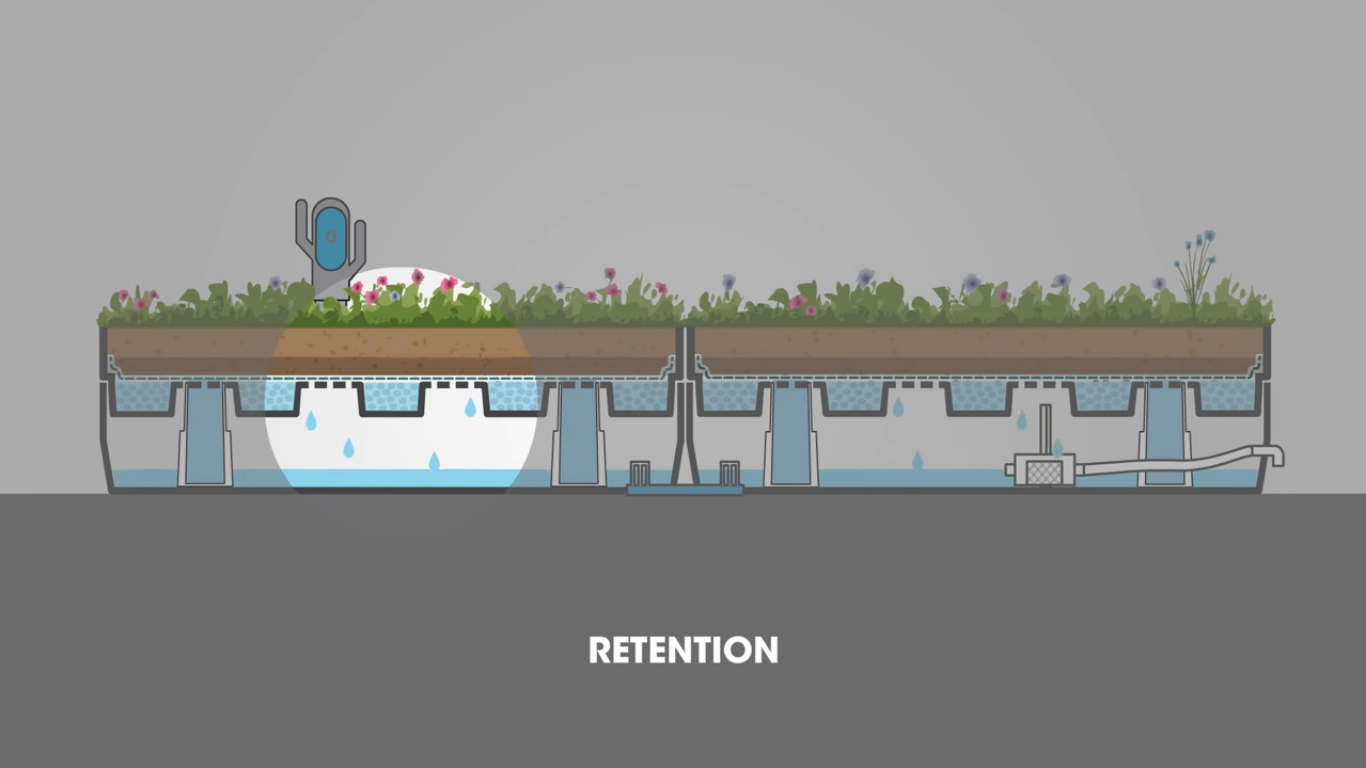 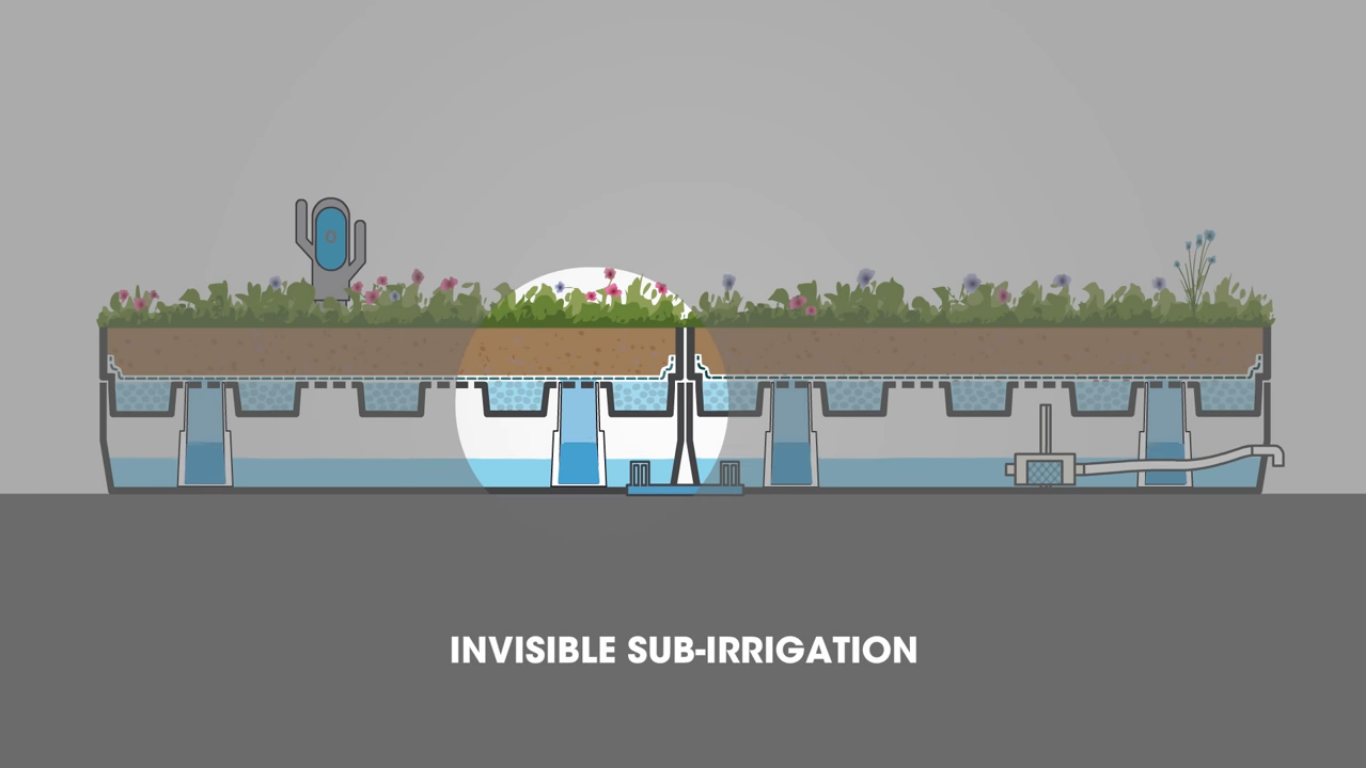 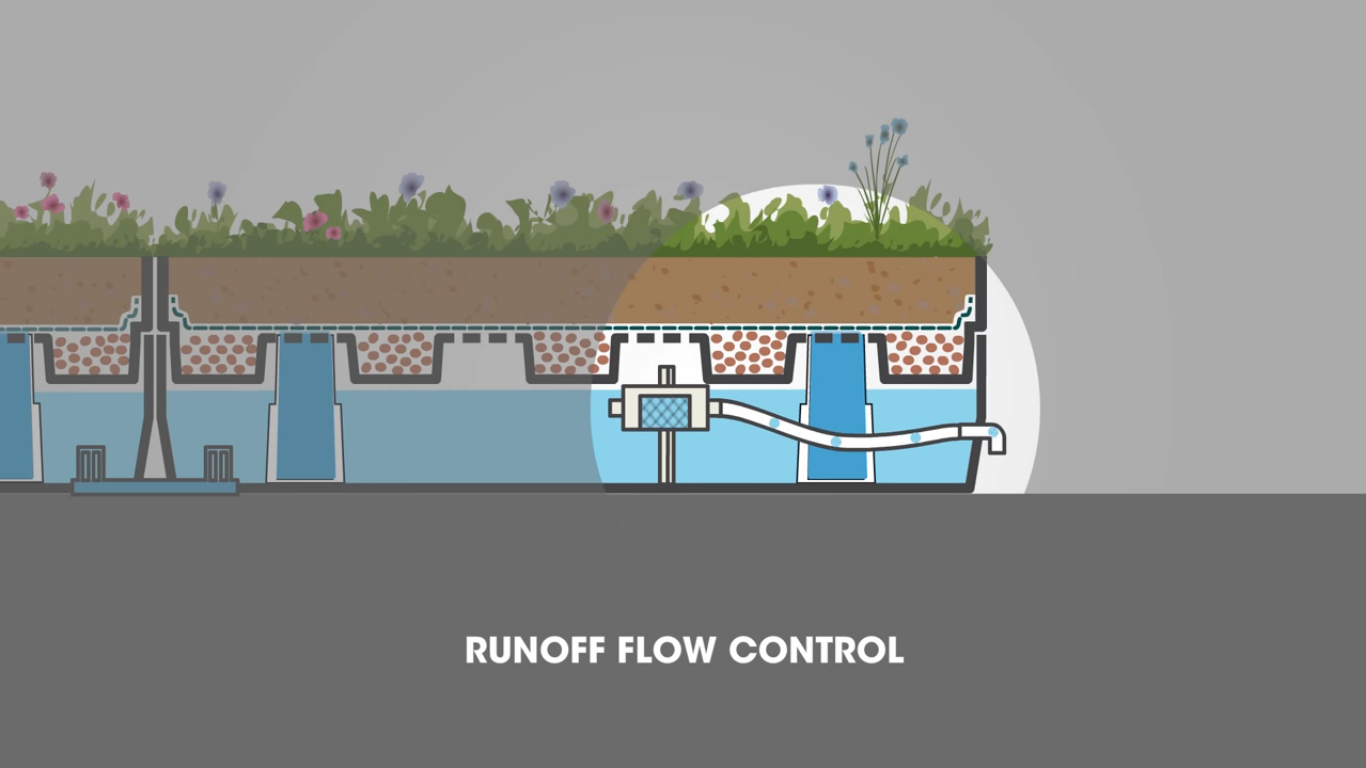 There are different ways of runoff flow control – from installing gully pipes to ropes from which the water will drip. Runoff drains much slower that from regular roofs and is present even 12 hours after precipitation, depending on the green roof type, slope and amount of rainfall.

Germany is the leading country in the number of roof tops and 10-14% of their roofs are covered with vegetation and the number of green roofs installed every year is groin by 10-15%.

Green roofs put an additional strain on the building static load, which needs to be taken into account. Different types of green roofs will add different weight to the roof – starting from 8 kg/m2 (when saturated) to a couple of hundereds of kg/m2.

Some existing buildings cannot support the weight of green roofs. Such an example is the sports hall roof which collapsed in Hong King in 2016 under the large green roof weight.

The main disadvantage of green roofs are the initial costs (up to double than normal costs).

Other disadvantages include possible maintenance costs, depending on the setup, and insects which can get inside the building through windows.

Some countries offer tax reduction, grants or rebates to encourage the installation of green rooftops.