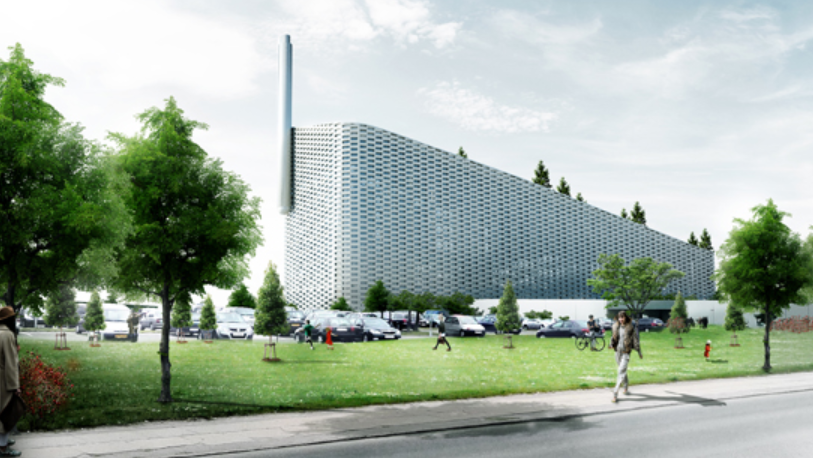 In 2018, Copenhagen’s new waste-to-energy plant will not only set the bar high for environmental performance but also for architectural integration into the landscape with the plant containing a variety of green and recreational spaces.

The city’s waste-to-energy plant, Copenhill / Amager Bakke, is being constructed by Amager Resource Center which is owned by five Danish Municipalities. The plant, projected to open in the summer of 2018, will be equipped with two furnace lines and a joint turbine- and generator system. This replaces a 45-year-old plant that had four furnace lines. With the new furnaces, Copenhill will burn 2 x 35 tons of waste per hour. Overall, Copenhill will:

In addition to the technological achievements of the plant, Copenhill will be architecturally integrated into the surrounding landscape with the inclusion of green and community spaces. Almost 3,000m² of the roof surface will be dedicated to the green landscape with planners creating ’10 places and 10 routes’. The places will contain a number of areas for visitors to look out from, take a break or work out in, while the routes will comprise a variety of walking and running routes that range from an inspirational hiking landscape to short-sprint and challenging training routes. Hiking on top of the waste-to-energy plant

Along the perimeters of the building there will be green areas for visitors to enjoy the view of the city. An artificial ski slope covering 600m², along with a ski center providing equipment, ski passes, and clothing to the public, will provide extra recreational opportunities for the public to enjoy. Skiing on the waste-to-energy plant

Finally, adventure-seekers will be able to climb the sides of the plant with the Danish Climbing Association involved in preparing a future climbing wall which will be one of the highest in the world at 80 meters.

Infrastructure of the future will be a mix of grey+green enabling multiple benefits to accrue from one site.

*Robert C. Brears is the author of  Urban Water Security  (Wiley),  The Green Economy and the Water-Energy-Food Nexus  (Palgrave Macmillan), and of the forthcoming title  Blue and Green Cities  (Palgrave Macmillan). He is Founder of Mitidaption, which consults on climate change risks to business, governance, and society.