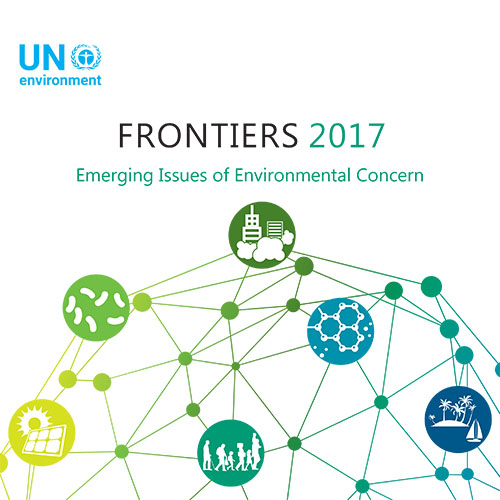 How does our careless disposal of antimicrobial drugs produce bacteria that can resist them? Why are Marine Protected Areas vital to achieving the Sustainable Development Goals? Can off-grid solar plug the energy gap for cities in the developing world?

UN Environment experts will address these and other emerging issues with the launch of Frontiers 2017, its latest annual report on the most novel environmental challenges facing the planet.

© US National Institute of Allergy and Infectious Diseases (NIAID)

Growing antibiotic resistance is emerging as one of the biggest global public health concerns of the twenty-first century. While studies have linked the intensive and often unnecessary administration of antibiotics over recent decades to increasing resistance, the role of the environment in the emergence and spread of resistance has received little attention.

Once consumed, most antibiotic drugs are excreted un-metabolized along with resistant bacteria through urine and faeces. The release into the environment of sub-lethal levels of various antimicrobial compounds in effluents from households and hospitals and in agricultural run-off, combined with the direct contact between natural bacterial communities and discharged resistant bacteria, is driving bacterial evolution and the emergence of more resistant strains. Solving the problem will mean tackling the use and disposal of antibiotic pharmaceuticals as well as the release of antimicrobial drugs, relevant contaminants and resistant bacteria into the environment. In this way, we may be able to reduce the rate at which new and more dangerous resistance develops.

Along with synthetic biology and artificial intelligence, a new urgency surrounds nanomaterials because of their potential for countless applications. We want to know more about them and what they can do for us. But we also need to know if engineered nanomaterials could pose threats in the future. Nano-sizing a material can give it amazing properties, but can also change its environmental and health impacts.

With so many more nanomaterials in development, there is a serious risk that we do not understand enough about their long-term effects in order to use them safely, unless we put greater safeguards in place. Past lessons from exposure to hazardous materials – such as asbestos, which had deadly consequences – teaches us that “no evidence of harm” is not the same as “evidence of no harm“.

Our oceans have been under too much stress, for too many years. Overfishing, extractive activities such as oil drilling, tourism, recreation, coastal development and pollution are damaging habitats and reducing populations of marine species at an incredible pace. We have lost half of the world’s coral reefs and are consuming nearly one-third of our commercial fish stocks at unsustainable rates. In short, we are using the ocean’s resources faster than they can naturally recover. And yet we cannot live without healthy oceans.

Marine Protected Areas offer one of the best options for maintaining or restoring the health of ocean and coastal ecosystems, particularly as part of a wider management system. The ecological, social and economic benefits from Marine Protected Areas support many of the 17 Goals of the 2030 Agenda for Sustainable Development. While a target of protecting 10 per cent of coastal and territorial waters by 2020 has already been achieved, protecting the marine environment also requires effective management and the equitable sharing of costs and benefits. Ultimately, governing the oceans in a sustainable way could see Marine Protected Areas as a driver – not a limit – for the vital economic and social benefits that we derive from the global ocean.

Sand and dust storm deposits are the advance guard of desertification. They result from strong turbulent winds eroding sand, silt and clay particles from arid landscapes and impoverishing their soils. The storms can raise large quantities of particles high into the air. They can travel thousands of kilometres across continents and oceans, entraining other pollutants on the way and depositing particles far from their origin. Dust harms both humans and animals. Chronic exposure to fine dust contributes to premature deaths from respiratory and cardiovascular diseases, lung cancer and acute lower respiratory infections.

The anthropogenic causes of sand and dust storms include deforestation and unsustainable agricultural practices as well as excessive water extraction and the modification of water bodies for irrigation and other purposes. Sand and dust storms are thus connected with a range of environmental and development issues that extend across national, regional, and continental boundaries. In the long term, reducing the threat from sand and dust storms will focus on strategies that promote sustainable land and water management in landscapes including cropland, rangelands, deserts, and urban areas, integrated with measures addressing climate change mitigation and adaptation.

Nearly 1 billion people worldwide live without electricity. While significant progress has been made in recent years, it is projected that nearly 780 million people could still remain off-grid in 2030. Solar energy was among the first renewable energy technologies adopted globally to meet the basic electricity needs of off-grid populations, mostly in rural areas.

Solar technologies are also relevant in the urban context. Currently, about one-quarter of the urban population in developing regions, or some 881 million people, live in informal settlements and many live without access to electricity. Recent years have seen the proliferation of small distributed solar energy systems serving low-income customers in Africa and Asia, where at least 95 per cent of the world’s off-grid population reside. There have been successful roll-outs of solar products with improved batteries, lower capital costs, affordable financing and easy access to pay-as-you-go schemes. With the right policies and regulations on renewable energy and a clear vision of future possibilities, off-grid solar could be key to achieving the 2030 Sustainable Development Goals for universal access to affordable, reliable and modern energy services, and for eliminating poverty.

We live in an era of unprecedented mobility, including the movement of ideas, goods, money and, increasingly, of people. About 250 million people live and work outside the country of their birth. Another 750 million people migrate within their own countries. Migration is a hugely important driver of development and progress, offering opportunities to individuals and families, as well as spreading ideas and creating connections around the world.