CES 2018: Zero Mass Wants to Get Water Off the Grid and Onto Your Roof 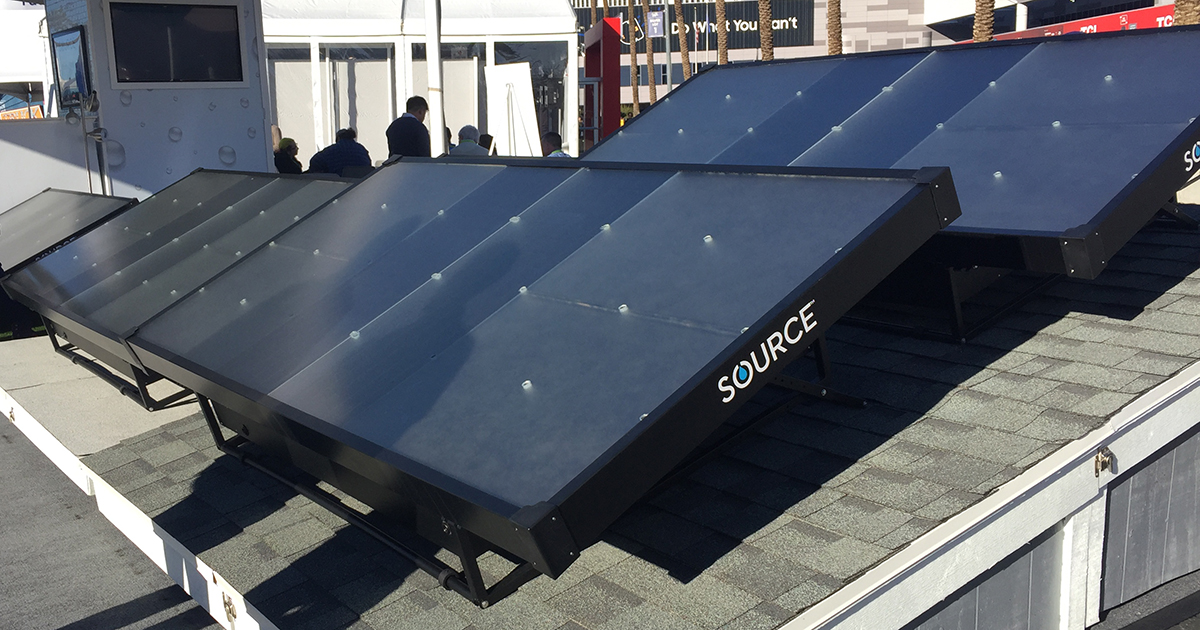 The hydropanel . It looks a bit like a solar panel. Indeed, it is part solar— the side sections create heat using solar thermal technology (see photo, above); the center two sections of each panel are full of solar cells So it does generate a little electricity, enough to operate its fans, pump, and electronics. But that’s not why you’d want it on your roof. Its purpose is to generate water—pure, safe, drinking water—from the air. Its creators say it works in almost any environment, be that the desert or the rain forest .

Why water? Zero Mass Water founder and Arizona State University associate professor Cody Friesen says that the water system today faces three challenges: a lack of transparency (we usually don’t know where it comes from or what is in the pipes along its journey), broken infrastructure (and that’s not just a problem in the developing world), and inconvenience (relying on bottled water for drinking). Friesen, speaking on a panel at CES this week in Las Vegas, had been thinking about the evolution of solar energy and wireless communications, and decided to try to decentralize water in a similar way.

“Today, everybody has a supercomputer in your pocket that can communicate wirelessly,” he says, “so if you built a town now, you’d never put in wires. Solar panels, same thing. Our technology enables a similar leapfrog of infrastructure for water.”

The company has been slowly rolling out its technology for use in emergency situations and to selected institutions and some investors—it installed arrays of panels at two public locations in Puerto Rico, where locals could come and fill bottles for drinking water, and at schools for refugees in Lebanon, for example. It now has a number of projects with municipalities in underserved communities in the United States that have failing infrastructures, Friesen said, but declined to specify the locations.

And Zero Mass Water is now on the U.S. market with $4500 single-household systems. Their U.S. launch in November came at a time when people are paying attention (in some cases a ridiculous amount) of attention to the water they drink and serve. (Zero Mass Water spokespeople make it clear that the company is not part of the “raw water” fad. Raw water involves untreated water that may contain unspecified bacteria.)

Friesen doesn’t see Zero Mass Water replacing all the water in a typical U.S. home, just the drinking water. The company says its household system will produce four to 10 liters of water a day; during installation, that output would be sent to a separate tap at the sink or to the refrigerator plumbing.

Friesen, a materials scientist, previously founded zinc-air battery company Fluidic Energy. For his hydropanel technology, he says, he engineered proprietary and, he believes, patentable materials that absorb large amounts of water from the air. (View the patent application here.) Then, the solar heating elements in the system raise the temperature of the materials, the water is released when they cool. Zero Mass Water spokesperson Sidnee Peck points out that the idea of generating water from the air is not new, but previous systems used a process that relied on cooling, rather than heating. This approach, she says, requires a lot more energy.

While Zero Mass Water’s hydropanels may not be connected to the water infrastructure, they do connect to the Internet when possible.

“We are digitizing water,” Friesen says. That is, the company can check remotely on every panel installed around the world, checking on its status, how much water it is producing, the purity of that water, and local weather conditions. (Every panel is its own weather station, Friesen points out.)

This distributed water system is part of a trend, Friesen believes. Pre-industrial revolution, he says, “we lived distributed agrarian lives. Now, we’ve grown ever more centralized. But technologies being developed now will lead to distributed resources again. We will start to rethink cities, rethink how we get the things we need.”