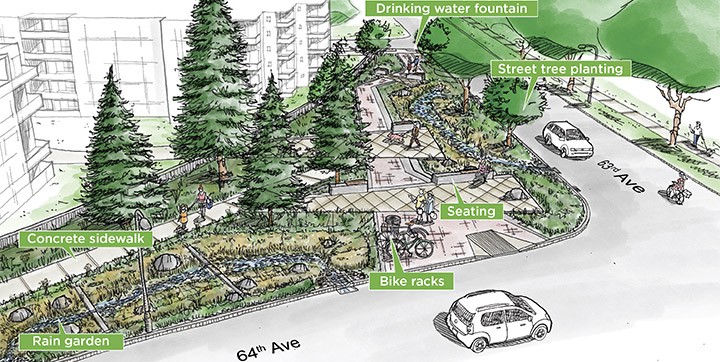 Many cities are turning to green infrastructure solutions that utilize nature’s ecosystem services in the management of water resources and associated climatic risks.

Green infrastructure is a strategically planned network of natural and semi-natural areas that are designed and managed to deliver a wide range of environmental, economic, and social benefits. These benefits include:

·  Improved water quality : When rain falls on a city’s surfaces (streets, sidewalks, and rooftops), it collects oil, litter, and other pollutants as it runs off city surfaces into waterways. Green Infrastructure enables cities to capture and clean this stormwater, ensuring waterways are healthier

·  Reduced potential for flooding : Green infrastructure slows down and holds stormwater allowing it to soak into the ground. This helps reduce the volume of water entering the sewer system and prevents flooding

·  Reduced sewer infrastructure cost : Green infrastructure reduces the volume of water entering the sewer system by returning water to the natural water cycle. This increases the lifespan of the sewers and reduces infrastructure maintenance costs

·  Increased green space for communities and wildlife : Green infrastructure provides multiple mental and physical health benefits to communities as well as provides a sanctuary for urban wildlife and pollinators

In Vancouver, over half the city is made up of impervious surfaces resulting in runoff carrying pollutants into local waterways as well as overwhelming the combined sewer system during heavy rainfall periods. The city’s goal is to capture and treat 90% of Vancouver’s average annual rainfall by using green infrastructure practices on both public and private land. One project contributing towards this target is the 63rd Avenue and Yukon Street Boulevard Improvements project which has been identified as an opportunity to increase access to green space, enhance rainwater management, and improve neighborhood amenities. The boulevard will feature sidewalks, seating plazas, bike racks, a drinking water fountain, and lush rain garden beds that will contribute to cooling down the surrounding area during extreme heat and provide clean water, air, and lush nature in urban spaces for the community and nature. The City of Melbourne, through its Urban Forest Strategy, has launched its Green Your Lane Pilot Project which investigates the opportunities for lanes to be greened for a variety of triple bottom line benefits including increased landscape permeability, improved aesthetics, and local amenity, and shading and local cooling. Melbourne’s laneways have been chosen to green as they are already internationally renowned for their street art and café culture and so are ready to be enhanced further to make them more green and sustainable places. A couple of examples of projects include Meyers Place with vertical greening on the carpark with trees and Guildford Place that will have plenty of ‘draingardens’ to catch stormwater.

In California, the Southern California Water Replenishment District estimates that in a single year alone, Los Angeles loses 58 trillion gallons of water to the ocean. To collect some of this excess water off the city’s impervious surfaces, the city is designing and constructing ‘green streets’ which are streets that reduce, treat, and capture stormwater runoff close to its source. One green street being constructed is the Laurel Canyon Boulevard Green Street Project that will see a series of vegetated infiltration swales and dry wells along the northeast side of Laurel Canyon Boulevard. During storm events, these swales and dry wells will capture and treat stormwater runoff from an approximate 123-acre drainage area and infiltrate it into the San Fernando Groundwater Basin. During a normal year, the project has the potential to replenish 13 million gallons of rainwater annually into underground aquifers.

Green infrastructure in cities mitigate climatic extremes all the while providing numerous triple bottom line benefits to humans and nature.