Dirty water is proving to be a big election issue nation-wide, but it's also on the mind of local government

Two major reports on water hit the Auckland Council's environment and community committee today. One looks at the health of the Hauraki Gulf, and the other aims to give residents more information about the state of their beaches. But another, behind-the-scenes move, made a year ago, is also changing the face of the region.

Water Sensitive Design is something developers of green and brownfield land have had to get used to, but most members of the public won't see unless they go looking for it. New housing subdivisions such as Flat Bush, Hobsonville, and Long Bay have incorporated it, but they really just look like a pleasant series of streams, bridges and gardens. They will prove their worth in something they won't produce - water runoff.

Auckland Council is riding the demand for change over the way cities treat water in a way that would have been unthinkable two or three decades ago. It's using the rush of development of subdivisions to introduce concepts that will hopefully revive dead rivers, catch toxins before they hit waterways, and mitigate flooding.

The new development rules mean anyone who wants to build a subdivision must not produce any more runoff than their site would if it was just grassed fields. So instead of just plonking up houses in a grid and concreting everything, they are being forced to look at the site as a whole - where the natural streams are, where they flow to, and where stormwater will end up. Where once they would have built pipes to contain water flow and then houses over the top, waterways are being restored with plants to soak up sediments, rain gardens being installed and features made of ponds. The upside is that with new intensification rules under the council's Unitary Plan, more homes can be built - and once they are, the view will be that much more pleasant.

These new homes also have water tanks, pervious paving is used, and swales in the centre of streets catch and clean runoff. The designer becomes all-important as efforts are made to work with natural contours instead of flattening earthworks. Plants need to be more carefully chosen - the thirsty ones to be put in rain gardens, others that will thrive in Auckland conditions to attract birds and insects, and thought put in to make sure weeds don't also take off.

The council's Healthy Waters Strategy and Resilience Manager, Andrew Chin, says it involves a lot of homework, but it's the kind of step change the city saw with the introduction of pedestrian-friendly spaces in Elliott St and Wynyard Quarter.

"Council is getting the message about needing to do better," he says. "We are learning as we go." But the days of concrete-lined channels are over. Chin says the benefits are long term, and ratepayers see clean waterways as a priority. 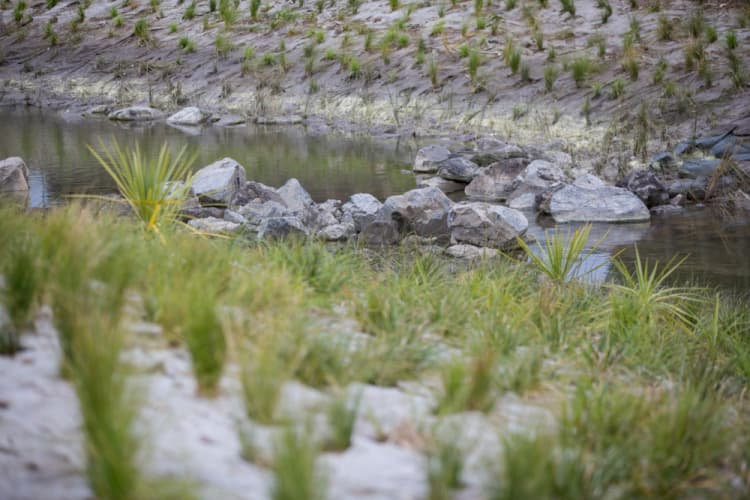 The Water Sensitive Design guidelines are described as a "tool box" of ideas, aimed at the private sector and property developers. "The council's not prescribing, 'thou shalt' .. it's really to enable these things to happen, says Chin. "It's inviting developers to tackle things in a much more sustainable way. The pleasing thing is that developers who start using the techniques also start to use it in their marketing." He says manufacturers are also beginning to produce products en masse for developments such as rain gardens, which is bringing the cost of them down.

Claudia Hellberg, the council's Wai Ora Strategy team manager, admits the new plans mean putting in a lot more thought and legwork before the bulldozers move in - mapping an area, looking at where waterways are - and where they once were - and then building around them. They have to figure out how much runoff will be added from surfaces such as rooves and concrete paths and take that into their calculations. "They have to be smarter about how they plan things out," she says. "What we are saying is that stream paths need to be managed - if the water's health is good it needs to stay good ... if it's poor, it needs to be improved. Everybody needs to look at how they can up their game."

Gretel Silyn-Roberts is the principal developer of the Water Sensitive Design plan, which came together with a lot of input from academic experts, overseas examples and technical reports. Some practices used widely overseas aren't so suitable here - living rooves for example, which need more sturdy structures than our lightly-clad homes, and aren't really suitable for earthquake zones. But they do catch 25 mm of rain for every 100 mm of topsoil, so there's one on top of the Civic car park in the city.

Silyn-Roberts says if its rules were being applied to the time that Queen St was being built, the CBD's main thoroughfare would still be a river, probably with a green portage line of cycleways out to the Manukau Harbour. Room would be made for flood planes and pockets of wetlands. The buildings would be more dense, but also further away. The Oakley Creek, which is being rehabilitated at a cost of $20 million, forms part of that old waterway.

"We are trying to create a string of pearls ... flood mitigation measures that can also refurbish wetlands," she says.

"Auckland's growth is providing pressure but is also bringing opportunities. If you are enabling intensive housing and at the same time improving the environment the outcome is a win/win."